About Zimm. The Game.

Zimm: The Game is an augmented reality (AR), location-based game. Our location is the UNM Zimmerman library, which is commonly referred to as Zimm by those who work in the library. The game immerses the player in exploring the physical world and the virtual game world.
Games can provide motivation for students, but educational games often fail to accomplish this vision because they lack a number of elements of successful games, such as narratives, or the game mechanics are simple or poorly connected to the content. This issue of ineffective gamification has been called “chocolate-covered broccoli.” We avoid this issue by including narrative and role-play, interactive elements, and an immersive quality and sense of surprise.
Zimmerman Library has mysteries about ghost librarians. Zimm: The Game is based on this scenario, engaging students as players exploring the library and getting familiar with library resources. In the game, made using the open source platform ARIS (https://arisgames.org/), players use many features, including location-based bluetooth beacon triggers, a QR code scanner and an AR image detector to help the librarians to solve the evil ghost problem.

Zimm: The Game was designed and launched Spring 2017, but we hope to keep the game evolving and growing.

Why a Ghostbusters game?

What else served as precedent for ​Zimm: The Game?

We had several brainstorming sessions, attended by various people, both associated with the library and not.
After several brainstorming sessions, we had many ideas—too many, and an ambitious, complex, incoherent storyline. Chris encouraged us to just make something simple as a place to start, then add on from there. Cindy Pierard took us on a tour of the famed tower, which provided a lot of inspiration. Chris also wanted to try out bluetooth beacon integration with ARIS, and was not sure how easy it would be.  He got it working, and Yang and I came up with a storyline that seemed feasible. We refined it quite a bit based on two rounds of playtesting (both recorded using GoPro head mounts, and one with me dressed as Holtzmann!). Chris and Yang did all the technical design while I worked on my PKE meter.

I really wanted to poke at the mural, given its controversial status. The Three Peoples mural was called out by Red Nation for its racist depiction of Native Americans and Latinx peoples. But amidst concerns over censorship, at the time of writing this, there has been little public response from the library. So the mural called out to me. And in particular, as a White woman, I felt safe poking at the third panel, which depicts three White adults, a man dressed as a doctor, holding a large White baby, and two scientists (including a woman!) in lab coats peering into their apparatuses. ​ 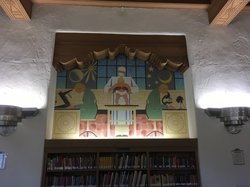 It was my husband's idea to photoshop out the baby and the apparatuses, but Yang did the actual work, which I think is pretty compelling. Instead of looking industrious, they look despondent. Such a small removal, yet such a profound change. 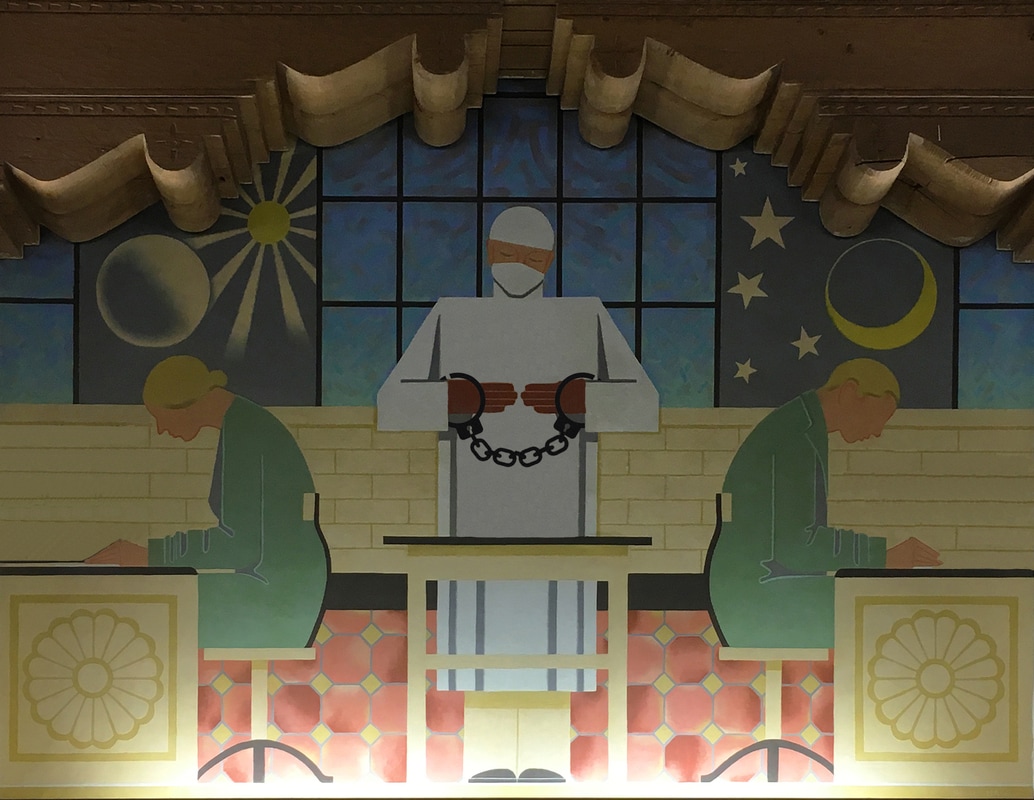 We go live in less that a week, but at the time of writing this, the credits for the game go to: